At the time this was the latest in M&S Sustainable Leaning Stores and is located at the Vanguard Retail Park, Monks Cross, York and opened in April 2014.

The new store features a 60,000 litre tank for recycling rainwater, and electric car charging points as well as living walls which help to filter pollution, and solar roof panels. Importantly, absolutely no waste was sent to landfill during the building of the store. Within the store M&S have utilised a wide range of recycled and re-used materials to make refrigeration cases, till points, shopping trolleys, display shelving and ticketing.

Currently being trialled are some of the most successful features including energy efficient light emitting diode (LED) lighting at existing Simply Food stores. Low energy displacement ventilation is also a standard across all new, large-format stores.

In a first for M&S, there are over 600 solar panels installed on the roof, which powers the Café and 10% of the store as a whole. The store is flooded with natural light, thanks to 60 architectural roof lights. Outside, two huge green living walls, totalling over 1,800 square feet, are testament to its environmental credentials, and makes the store look fantastic.

The store provides 100,000sq.ft of retail space split between womenswear, lingerie, menswear, beauty, homeware along with a 170 seat café offering views back to the city centre and York Minster.

TB+A’s role normal design role was extended to providing a Post Occupancy Evaluation (POE) and analysing 12 months’ of energy and environmental performance data. A key outcome from this study showed that the electrical power generated from the solar panels exceeded the original predicted output 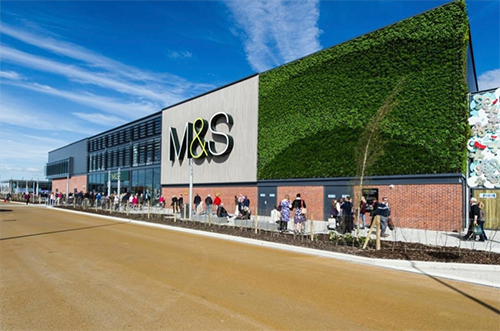